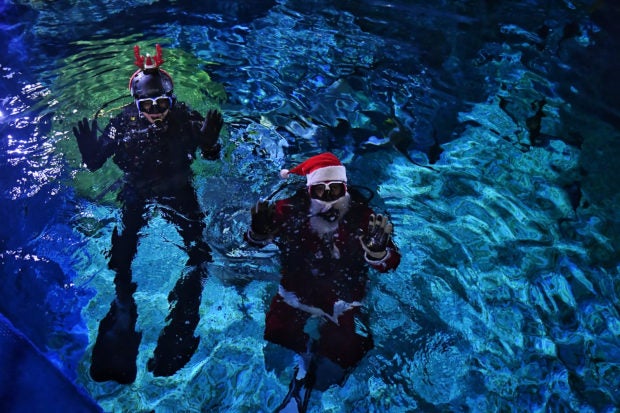 Divers dressed as Santa Claus and a reindeer put together to feed sharks and rays on the Sea Life Bangkok Ocean World aquarium in Bangkok on December 8, 2021. (Picture by Lillian SUWANRUMPHA / AFP)

Bangkok, Thailand — It was starting to look rather a lot like feeding time, as a diver wearing a Santa go well with hopped into an aquarium at a Bangkok mall to unfold fish scraps and good cheer simply in time for Christmas.

Sea Life Bangkok Ocean World kicked off the vacation season this week with staff dressing in festive gear as they went by their every day feeding routine within the huge aquarium.

For the sharks, stingrays, and colleges of colourful fish, the diving duo — one dressed as Santa Claus and the opposite sporting reindeer antlers — introduced pleasure to their world as they flung out meals scraps.

On the opposite aspect of the glass, guests took selfies with the Santa diver, who gamely waved when not forking out chunks to passing sharks.

Stingrays floated ethereally throughout the huge tank, making an attempt to catch gifted fish of their flat mouths.

Kids stared in awe as yellow-and-black damselfish swirled round Santa, who appeared suspended in mid-air like an angel.

“I’m very impressed (with the present),” stated Emachana Piyasakulkaew, who visited the aquarium along with her younger son.

“He’s so excited and if he likes one thing, he’ll watch till the tip. And in the present day he watched it from begin to end.”

The Christmas-themed feeds can be held every day from December 14 to 26 on the aquarium, which is positioned in Bangkok’s famed Siam Paragon mall.